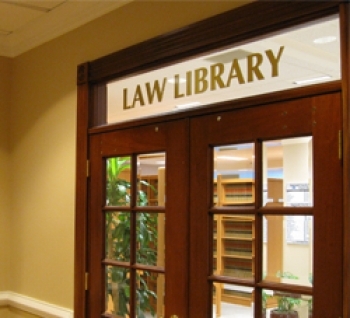 This month the Marin Lawyer spotlights Laurie Vaala-Olsen, head librarian at the Marin County Law Library. Tim Nardell interviewed her and learned not just about her but even more about what’s happening at the library.

Marin Lawyer: First, tell us a little bit about yourself. How did you come to be a librarian and how did you get involved with the Marin Law Library?

Laurie Vaala-Olsen: I hate to admit it, but my work in the legal field dates back to the 1980s when I worked as a litigation paralegal for a San Francisco law firm. I also managed their recruiting program for summer associates. In 1985, I moved to what was then the San Rafael law firm of Bianchi, Engel, Keegin & Talkington, where I worked primarily as a litigation paralegal for about nine years. I left to raise my family and was out of the work force for about 10 years. I had just begun working again as a freelance paralegal when my family was transferred overseas for my husband’s work. Upon my return, I enrolled in the ABA-approved paralegal program at San Francisco State to update my knowledge and skills and received my paralegal certificate in 2010. I was volunteering at the Marin County Law Library and working part-time for a few solo practitioners when I realized that I preferred library work to paralegal work. When the opportunity arose to work at the Law Library, I seized it and here I am.

Marin Lawyer: What is the mission of the Marin County Law Library?

Laurie Vaala-Olsen: Its mission is to provide legal professionals and the general public alike with access to legal information resources in a variety of media, research assistance and the technologies needed to give practical expression to the law, while maintaining a flexible and supportive presence that fosters the ends of community service and social justice.

Marin Lawyer: How does the Law Library get its funding?

Laurie Vaala-Olsen: It is funded by a small portion of first-paper filing fees in civil, family and probate cases and those revenues have been in decline for several years. Prior to 2008, county law libraries were able to request annually from their boards of supervisors up to a $3 increase in the portion of civil filing fee that they received, which served as a hedge against inflation. In 2008, local control of filing fee increases was removed from the counties and transferred to the state and the portion of filing fees that each county law library was receiving in 2008 was permanently frozen. That change unfortunately coincided with the mortgage crisis and the Great Recession. Remarkably, our filing fee revenue did not begin its precipitous decline until the 2010-2011 fiscal year, but it has declined 34% since that time. We were forced to cut numerous subscriptions, reduce operating hours and lay off staff.

Marin Lawyer: The MCBA has been working hard with the library to support the Lawyers in the Library program for the last couple years. How would you say the program is doing?

Laurie Vaala-Olsen: Lawyers in the Library is a robust program that has been a tremendous success. Over 90 attorneys have volunteered to staff the twice-monthly clinics since the program’s inception in October 2016. We try to staff four attorneys for every clinic, but sometimes that is a challenge. Mee Mee has been remarkable in her ability to find attorneys to staff the clinics when we experience a cancellation or limited sign-ups for a given clinic. Many attorneys have volunteered on several occasions. Most program participants come seeking help with family law and landlord/tenant matters, but we also see a significant number of people seeking help with employment, probate and estate planning and various civil and small claims matters. We collect exit surveys from the patrons after their meetings with the attorney volunteers and the overwhelming response is one of gratitude for the program and the assistance they received. Many patrons have commented that they feel more confident in their ability to handle their problems armed with the information and guidance they received from the volunteers.

Marin Lawyer: What new projects are you working on this year at the Law Library?

Marin Lawyer: What challenges is the Law Library facing this year?

Laurie Vaala-Olsen: The Law Library faces funding challenges as filing fee revenue continues to decline and publications and operating costs rise steadily every year. Over 90% of our budget comes from filing fee revenue, so fundraising to supplement the gap between income and expenses is necessary. Although the law library has a small revenue stream of additional funds from copy and print charges, conference room rentals and proctored exam fees, it does not begin to make up for the decline in filing fee revenue.

Marin Lawyer: What successes have you had recently that our members should know about?

Laurie Vaala-Olsen: I am a member of the Council of California County Law Librarians (“CCCLL”) and we lobbied extensively for more than four years to obtain additional funding for county law libraries from the State Legislature. That advocacy effort resulted in a one-time budget allocation of $16.5 million to fund all county law libraries statewide last year. The amount that the Marin County Law Library received served to bring our fiscal year 2017-2018 filing fee revenue up to the amount we received in fiscal year 2008-2009. We used the funds to purchase the software program to upgrade the catalog and to add or restore numerous publications to our collection, including California Forms of Pleading and Practice, updated Nolo Press titles, publications for self-represented litigants and several Nutshell books. In addition, we purchased a subscription to the National Consumer Law Center online database and 20-volume print collection.

Marin Lawyer: Is there anything else that our membership should know about the law library?

Laurie Vaala-Olsen: We are advocating for another funding allocation for county law libraries in the 2019 State Budget and in continuing years. A stable funding source would make it possible to develop an annual budget with revenue projections that we could better rely on, which in turn would facilitate planning for new programs and expansion of our services, such as restoring weekend hours.

Marin Lawyer: What do you enjoy most about working and living here in Marin?

Laurie Vaala-Olsen: I love working in the community where I live, especially the short commute! Although I am a transplant from the Midwest, I have lived in Marin for more years than I care to reveal, and I am still amazed at and appreciative of the variety of cultural and recreational diversions at my fingertips. I can be out on a hike enjoying the rugged, natural beauty of the area in the morning, and dine at a fine restaurant followed by attendance at an exceptional theater production in the evening. I love to cook and bake so I enjoy the wonderful array of cuisine the Bay Area offers as well.