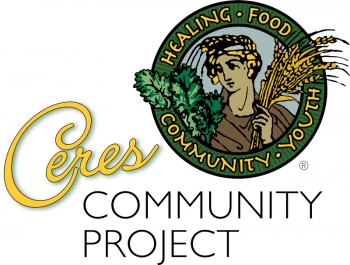 “Meals that Nourish the Critically Ill and Empower Teens”

Nothing conveys support and caring better than a healthy, home-cooked meal. Ceres Community Project has been providing that support to those in need for the past twelve years in the North Bay with free, healthy food for people in crisis. In the process, it empowers teens to learn about nutrition, cooking and the healing power of food.

The Ceres model is unique, in that it engages teens in the preparation of healthy meals for people with cancer and other life-threatening illnesses. Over the past 12 years, more than 3,000 Ceres volunteers have provided 100,000 meals to 4,000 primarily low-income families struggling because of a serious health challenge, who otherwise would not have access to healthy, organic, home-cooked meals. All the meals that Ceres provides are prepared by youth ages 14 and up who volunteer in the Ceres garden, and in three commercial kitchen sites in Marin and Sonoma Counties. Skilled mentors give teen volunteers the opportunity to learn to cook and eat for health, gain skills to be successful at school and work, develop leadership, and discover the joy of giving back.

Founded by Cathryn Couch, Ceres is a pioneer in the “food as medicine” approach that now is capturing the attention of health professionals, researchers and insurers nationwide. The premise is that medical outcomes and treatment costs of chronically ill, low-income people improve when they receive daily nutritious meals. According to Couch, “many of our clients live alone without a support system. They’re too sick to shop and cook, and most of them are poor…[I]t’s not an exaggeration to say our food has enabled them to survive.”

One associate chef described Ceres’ impact as follows: “Before working here, I thought this program was just about healing foods for people going through chemo. After I arrived, I realized it is so much more, that it also has to do with farmers, youth and community, and that it gives everybody involved a sense of purpose. Those are big concepts. These are big issues.”

Looking at the larger picture has led Ceres to participate in studies with researchers from Stanford and UCSF to assess how healthful eating positively impacts a patient’s prognosis, treatment and the cost of medical care. One such study reveals that 60% of deaths in the US are related to poor diets. Ceres is committed to changing that statistic, and is exploring alliances with the Whole Cities Foundation, which awards grants and forms partnerships with locally led, fresh food access projects.

The Ceres model is also gaining nationwide recognition. Since 2010, community groups around the country inspired by its work have been reaching out to the nonprofit to help them bring Ceres’ innovative model to their towns.

How did the Ceres Community Project get its name? Ceres is the Roman goddess of agriculture. The Universal Mother, she symbolizes unconditional love and is considered the most generous of all the goddesses. For this nonprofit, “a meal prepared with love is the most powerful way to show we care.”

For more information, and to learn how to support Ceres Community Project, go to: www.ceresproject.org.