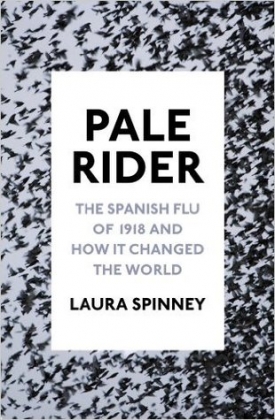 “Those Who Cannot Remember the Past Are Condemned to Repeat It.” – George Santayana

The 1918 flu pandemic spread further illness and death around the world just as the First World War was drawing to a conclusion, infecting as many as 500 million people and killing anywhere from 17 to 100 million. Despite its enormous impact, it largely became a historical footnote to the war, overshadowed in history books by the war and then by the Great Depression and World War Two. This pandemic is commonly (but inaccurately) referred to as the Spanish Flu. In her fascinating book, Pale Rider: The Spanish Flu of 1918 and How it Changed the World (Public Affairs, 2017), author Laura Spinney describes the root causes of the pandemic and its impact on the world. Fascinating, but surreal: Surreal to read how similar the political and societal turmoil the pandemic caused were to what is happening today, as we experience the gravest pandemic since that time:

The competing interests of the collective are the reason that historian Alfred Crosby, who told the story of the flu in America, argued that democracy was unhelpful in a pandemic. The demands of national security, a thriving economy and public health are rarely aligned, and elected representatives defending the first two undermine the third, simply by doing their job.

Spinney fleshes out similar insights, showing us that COVID-19’s challenges are not “unprecedented,” but entirely predictable from the events of 1918. Even controversy over the naming of each disease shows striking parallels. 1918’s Spanish flu gained its name when Spain was the first country to openly report about the outbreak. The flu did not begin in Spain. It very well may have more accurately been called the American flu because the first recorded outbreak occurred at an army camp in the United States. Army troops spread it to the east coast of the United States and then into Europe via troopships carrying soldiers to fight in the trenches of France. The warring powers censored all reference to the illness spreading through their ranks because they feared defeat from letting enemies know their weakness. Little did they know that the flu was impacting all the warring armies. Since Spain was not involved in the war, its papers freely reported on the epidemic, hence the “Spanish Flu.”

Spinney does an excellent job describing the cultural and political aspects of the 1918 pandemic. Parallels with our current pandemic abound. Take for example this recent news item:

May 28, 3:05 p.m. The City of San Francisco is now requiring that individuals wear masks whenever they leave their homes and interact with people outside their households.

The city previously only required masks in mostly indoor situations, but it now mandates that individuals wear masks when exercising less than 30 feet from others or when passing people on the sidewalk.

During a Thursday press conference, Mayor London Breed stated that businesses have the right to turn away any individuals who are not wearing masks, but asked that individuals not confront non-mask-wearers.(Graff et al., Coronavirus Updates: San Francisco Imposes Stronger Mask Requirements (May 28, 2020) SFGate <https://www.sfgate.com/news/editorspicks/article/updates-coronavirus-San-Francisco-Bay-Area-15300700.php> [as of May 31, 2020].)

And compare it to this passage from Pale Rider:

In 1918, as soon as the flu had become reportable and the fact of the pandemic had been acknowledged, a raft of social distancing measures were put in place—at least in countries that had the resources to do so. Schools, theatres and places of worship were closed, the use of public transport systems was restricted and mass gatherings were banned. Quarantines were imposed at ports and railway stations, and patients were removed to hospitals, which set up isolation wards in order to separate them from non-infected patients. Public information campaigns advised people to use handkerchiefs when they sneezed and to wash their hands regularly; to avoid crowds, but to keep their windows open (because germs were known to breed in warm, humid conditions).

Although Pale Rider is dense with interesting facts, anecdotes, and statistics, it is not a difficult or laborious read. Spinney writes well, always illustrating her points with well-chosen examples. She does a particularly good job relating political history and describing the societal change caused by the 1918 pandemic, exploring how societies and political systems fell or rose as a direct result of the pandemic. The pandemic may have played a role in the Bolshevik victory in the Russian Civil War, replacing the tsars with the Soviet system, and a strong argument can be made that American President Woodrow Wilson was a victim of the flu. Spinney concedes that the course of history is a complex interplay of different events but convincingly argues that the 1918 pandemic had a tremendous impact of the course of the Twentieth Century. After finishing the book, I was left to ponder what long-term impact our current pandemic will have on the course of human history.
Charles Dresow is a partner at Ragghianti Freitas LLP. His practice focuses on representing those accused of crimes.