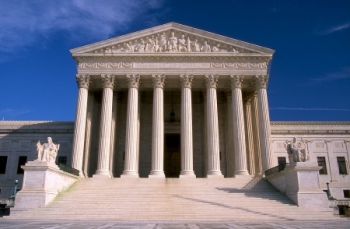 On July 23rd, MCBA welcomed member-favorite Professor Rory Little1 for his annual SCOTUS update: “The U.S. Supreme Court: Ruling in Unprecedented Times.” In his ninth year presenting to MCBA, Professor Little’s deep knowledge and wry humor shone through on Zoom screens throughout Marin and beyond. What members lost in the lack of a meal and in-person camaraderie, they gained with front row seating, and the opportunity to watch Professor Little in their pajamas, truly a once-in-a-lifetime experience (or perhaps twice or thrice, depending on the course of the pandemic.)

Professor Little called this court term “unprecedented” in that the Supreme Court canceled two months of oral argument, something that had not occurred since the Civil War. In May, the Court embarked on a first for the Court: hearing 10 cases via live-stream audio and allowing the public to listen live. The first two cases, considered by some to be less complex, allowed the court to “practice” the new audio format in preparation for the following eight cases, purportedly of greater import. The Court postponed twelve cases to its next term, to be heard in October.

During those May hearings, each Justice was allotted a specific length of time to ask questions, in descending order of seniority. Justice Clarence Thomas (3rd in line), with a reputation for rarely asking questions, asked many, and quite vigorously, presumably correlated to the new format. Professor Little suggested that anyone listening to these hearings would form a new impression of Justice Thomas.

Professor Little described this term as “small,” relatively, in that only 53 cases resulted in signed opinions. A few notes on the more high-profile cases he discussed:

1. McGirt v Oklahoma. The Court ruled that 40% of the state of Oklahoma is currently “Indian country” and not part of Oklahoma. Justice Gorsuch has had a particular interest in Native American law and ruled with the majority.

2. Trump v. Vance and Trump v. Mazars. The Court considered whether third-party subpoenas seeking financial records of Donald Trump could be enforced. The Court decided these subpoenas could be enforced and that state grand juries and Congressional committees have authority to subpoena them. The Court ordered that on remand, the lower court consider subpoena-specific details, such as whether the subpoena is valid, narrow and not harassing. But ultimately, the President has no immunity from enforcement of a subpoena, nor is there a higher standard for him (or someday, her).

3. Bostock v. Clayton County (and consolidated cases). These cases raised the question whether Title VII of the 1964 Civil Rights Act prohibiting discrimination “because of…sex” includes discrimination on the basis of sexual orientation and gender identity. Justice Gorsuch wrote the opinion for the six-member majority, concluding that the “plain language” of the statute is clear that it does. The Marin Lawyer has been following these cases and you can read a detailed analysis of them here.

4. Chiafalo v. Washington and Colorado Department of State v. Baca. A unanimous Court found that states can punish “faithless electors,” i.e., those who do not vote for the candidate they were elected to vote for.

5. Homeland Security v. Regents. Was the Trump administration’s revocation of DACA legal? In a 5-4 decision, the Court said no, remanding the case for further action. At its core, it was a simple administrative law case, and the Court ruled that the government was arbitrary and capricious in its action.

6. Ramos v. Louisiana. Two states (the other was Oregon) allowed nonunanimous criminal jury verdicts. The Court has held that the Bill of Rights requires unanimous verdicts, but only in federal cases, as a result of the all-too-common 4-1-4 voting pattern with Justice Powell at the center. In revisiting the issue of whether unanimity is required in state verdicts (via the Incorporation Doctrine that fundamental rights apply to the states through the 14th amendment), the Court decided that it is. Because the decision overturned the earlier decision, court watchers were much more interested in what the fractured set of opinions revealed about the justices’ views on stare decisis. You can find out in another article in this edition of the Marin Lawyer.

7. County of Maui v. Hawaii Wildlife Fund. The Court found that the Clean Water Act’s requirement for a permit to discharge pollutants from a point source into navigable waters applies even when the pollution is not discharged directly into navigable waters but also when it is the “functional equivalent of a direct discharge,” in this case via groundwater. Justice Kavanaugh voted with the majority.

8. Georgia v. Public.Resource.Org, Inc. Under the government edicts doctrine, government officials cannot copyright work created as part of their official duties. This has long included the language of the law itself but the Court ruled that it also includes annotations created under contract with the state.

This summary cannot replace Professor Little’s fun and informative program. We are fortunate he will be returning to MCBA this November for the annual MCBA CLE Fair, taking place right after the November election. Undoubtedly Professor Little will have a lot to say. We hope you can join us!

1 Rory Little is the Joseph Cotchett Professor of Law at UC Hastings, where he has been teaching since 1993. He is a former U.S. Supreme Court Law Clerk, and has worked as both a federal prosecutor and federal defense attorney. From 1996-1997, he served as an Associate Deputy U.S. Attorney General under Janet Reno. At Hastings, he teaches Constitutional Law, Criminal Law and Legal Ethics.