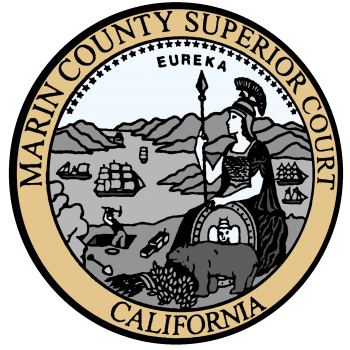 On May 13th, MCBA sponsored a town hall-styled event featuring three of our Marin Superior Court judges: Presiding Judge Andrew Sweet, and Supervising Judges Verna Adams and Stephen Freccero. MCBA Board President J. Timothy Nardell moderated the hour-long event, which provided members with a look into the measures the judiciary has taken to keep our courts operating over this unusual past year as well as a glimpse into what the (near) future holds. So as not to bury the lede, Judge Sweet stated approximately 20 minutes into the presentation that there would be "No Big Announcements!" during the event, which nonetheless was amply informative.

Judge Sweet began with a brief summary of the current general orders, followed by status reports on the criminal, civil and family law divisions. He prefaced his remarks by noting that everything discussed during the event would have two main subtexts: 1) the courts are currently almost at full operations, with the exception of jury trials, which are being conducted at a slower pace with hopes to get back to normal trial procedures as soon as possible; and 2) court operations are currently constrained by physical space and available staff. In pertinent part, Judge Sweet indicated that the then-current order (21-04) allows for: 1) use of remote technology; 2) holding proceedings anywhere in the county, if necessary; and 3) time relief for juvenile matters and criminal matters. [Editor’s Note: The latest order (21-05) allows the same.]

Judge Adams started her Family Law Court update by first acknowledging Judge Sweet for yeoman's work guiding the courts through an unprecedented time and then acknowledging all the judges for mastering the art of presiding over a virtual courtroom. All Marin judges are now at a Judge Haakenson-like level when it comes to technology. The three family law judges (Judges Adams, Lichtblau, and Talamantes), along with Judge Wood's juvenile court matters, are currently sharing Courtroom L. Each judge is handling their matters vertically and takes turns using the courtroom. They hope to be getting the use of courtroom G as well. All matters are being held virtually.

Judge Freccero's civil division has been operating as a single consolidated civil department, working remotely out of Courtroom B. Each week, one of the three civil judges acts as the duty judge, handling all courtroom matters for that week and setting new dates based on when they will be duty judge in the future. All matters have been virtual and calendars have had minimal delays. In the beginning of virtual appearances, there were slight technical issues and only on the attorneys' end clearly, but thankfully no virtual cat appearances. While technically not a big announcement, Judge Freccero indicated that Courtroom E was recently designated the civil overflow courtroom for all types of matters. The intention is to allow the civil judges to specially schedule matters for a time when they are not the duty judge, which should significantly increase capacity and workflow.

Judge Sweet provided an update on the rest of the departments, indicating that just about everything is up and running. Probate (Judge Simmons) and Juvenile (Judge Wood) are conducting law and motion, trials, etc. all virtually. Small Claims matters are being heard 1.5 days per week and pro-tems are being invited back to hear these matters. Traffic (Referee Slavitt) is fully remote unless the law requires an in-person trial. Veteran's Treatment Court will be proceeding starting in July, with Judge Chernus presiding. Further on the criminal side, Judge Sweet indicated that homicide trials are stacked up weeks to months out and there are currently eight or nine pending homicide cases, which he believes to be a high for the Court. Also of note, he pointed out the recent proliferation of pending misdemeanor diversion motions following the passage of a new law that allows judges to grant diversion.

At this point, the panel opened up the discussion to questions from the membership via our moderator. The first question ("Any big changes to the courts upcoming?) is what prompted Judge Sweet's big announcement that there would regrettably be "No Big Announcements!" Nonetheless, Judge Sweet emphasized that the court would generally be guided by safety protocols or "safety, safety, safety." While the judges are uncertain what changes may be coming, Judge Sweet reminded us of Governor Newsom's announcement that the state would be opening up mid-June, including a possible lifting of any mask mandates. As he sees it, the six-foot social distancing mandate is probably the biggest driver of what courts can do, considering the fixed size of a courtroom. June may see new rules that create greater opportunities to open up further.

J. Timothy Nardell (JTN): Do you see a way in which our courts will have a virtual option even after we open in full?

Judge Sweet (JS): Our courts will always try to accommodate those who need it for health concerns. Personally, he believes we should be taking advantage of virtual options in the future where the law allows.

JTN: What is the status of the clerk's office, in particular with respect to backlogs and filings?

JS: While the Court is aware of the issues, the clerk's office is still not fully staffed. He is encouraged by the willingness of team members to pitch in as much as possible. In general, the office has a four to six-week backlog of filings on non-urgent matters. Rush documents are still being processed on the day of filing/receipt. He emphasized that his number one administrative goal is to find out why the office is behind and how to fix it.

JTN: We have heard there are issues getting access to court records; what is the status?

JS: He has a newfound commitment to dive into the issue but already the Court has clerks working on Saturdays to address the backlog of requests. On a slightly different topic, he wanted members to be aware the Court is looking into an e-delivery system (not e-filing) by late summer, early fall, which would allow attorneys to deliver documents electronically instead of dropping them off at the clerk's office or in a drop box.

JTN: How are trials currently being handled?

Judge Adams (JA): The Family Law Division is not experiencing the same issues as the other divisions and is current on everything but jury trials. They are so efficient that attorneys are complaining about available hearing dates being "too soon."

JS: There are 83 criminal jury trials set between now and June 15; 15 of those do not have speedy trial time waivers. There are currently only two jury trial courtrooms available and only one jury panel can be picked at a time due to social distancing.

Judge Freccero: No civil jury trials are taking place because criminal trials have precedence; however, some virtual trials are occurring in cases where no jury trial right exists or it has been waived. He is finding that virtual trials are very effective, with evidence coming in more organized than usual and no unusual delays. He asked our members to strongly consider waiving juries, consenting to virtual trials, and/or stipulating to a jury of less than 12. He is currently starting to set jury trials in August and is booking through March 2022.

JTN: On the issue of equity and diversity in the courts, do you have any thoughts on dealing with diversity, bias, and perceived bias?

JS: The Court is keenly aware of the issues and has been doing as much as possible to address them. This includes annual training requirements, which include judicial training on equity issues. The Court is actively working on these issues, much like other courts around the state, and they always have been.

JTN: How is the Court addressing economic disparity?

JA: Family Law Courts are acutely aware of it because of the number of litigants who are self-represented because they cannot afford an attorney. Our Court has many resources available that create greater access to justice, including the many services through the self-help center. Virtual court appearances have also been invaluable to economically disadvantaged self-represented litigants by lowering barriers to making court appearances. Finally, our Court has received a Judicial Council grant to procure technology to allow indigent litigants to take advantage of virtual features and access.

JS: Approximately a year ago, the Court stopped sending delinquent traffic fines to collections because the extra fees from collections further weighed on those who could least afford it.

In his closing remarks, Judge Sweet offered thanks to MCBA’s membership for all the work you do, especially the amount of volunteering for court programs. He believes the Bench and Bar interaction in Marin County is without parallel and looks forward to maintaining that relationship. Finally, he asked MCBA to remember to invite him to future in-person MCBA events (where drinks may be on him—or something like that).

To close out the event, Judge Adams reiterated Judge Sweet's comments and left the membership with these parting words: "You are the best!" Thank you, judges, and ditto.