Meet Laura McMahon: A True Servant of Justice and the New Executive Director of Legal Aid of Marin 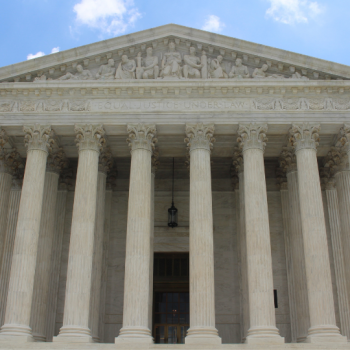 It’s all about Dobbs.

So reported Professor Rory Little at the MCBA general membership meeting on July 7. Before introducing Professor Little, President Rosborough welcomed over 70 members to our first in-person regular membership meeting since the pandemic began, prompting an enthusiastic round of applause. As he has done for years, Professor Little then took to the podium, wrapping this year’s SCOTUS term with his insightful and humorous observations, commentary, and predictions.

Dobbs v. Jackson Women’s Health Organization, of course, was the U.S. Supreme Court case announced in June, by a 6-3 vote, that overturned Roe v. Wade. The decision declared that there is no federal constitutional right to abortion.

Prof. Little explained the majority and concurring opinions. The majority opinion held that Roe had been wrongly decided from the start, stating that substantive due process, required of the states via the 14th Amendment, does not apply to a shifting sense of “liberty.” Rather, the court said, one must examine history to determine what the states meant when they adopted the amendment. Based on the majority’s examination of that history, the adopters did not consider abortion to be covered as an essential liberty. Justice Alito, who wrote for the majority, took pains to state that the decision invalidated only abortion rights and should not be read to imply anything about other liberty interests.

(As an aside, Prof. Little noted that the Founders, in establishing a new nation under a new Constitution, were hardly bound by history or tradition.)

According to Prof. Little, Justice Kavanaugh was stung by his bitter confirmation hearing, and strives now to be seen as a peacemaking, decent person. In his concurrence, he took pains to point out that Dobbs will not have the dramatic effect some predict; for example, states would not be able to ban residents from going elsewhere for abortions because of the constitutional right to travel. But, Prof. Little added, there is no explicit constitutional right to travel; it comes from the same sense of substantive due process, or “essential liberty,” upon which the former right to abortion was premised.

Chief Justice Roberts, now only nominally the leader of the court, would have upheld the Mississippi law at issue in Dobbs as consistent with Roe and its successor, Casey, without actually overruling those cases.

Justice Thomas, now the senior member of the court, effectively called out Alito on Dobbs’ effect on other liberty interests, opining in his own concurrence that there is no such thing as “substantive due process” under the 14th Amendment; in fact, he considers that an oxymoron. On this basis, he would overrule all precedent that established constitutional rights based on an essential liberty unless expressly identified in the Constitution, including rights to contraception, same-sex marriage, and private sexual conduct. Prof. Little noted that most commenters on the majority opinion do not see a logical basis in its reasoning that would distinguish abortion from these other liberty interests.

Speaking of precedent, Prof. Little—who clerked for Supreme Court Justice Stevens and writes for SCOTUSblog—pointed out that the present court is far more likely than usual to overrule or ignore precedent. He says that entire terms typically go by without a precedent being overruled, but this term there have been at least three overruled. The current court is also much more willing to use the “shadow docket,” in which it makes decisions without full briefing or argument: the court issued a total of eight such rulings during the combined presidential terms of George W. Bush and Barack Obama, but 40 of them under Donald Trump. In the past, “shadow docket” cases had no precedential value, but this term the court has cited several of these rulings in later decisions.

In response to audience questions, Prof. Little discussed religion cases, in which the court now seems to favor the First Amendment’s “freedom of religion” clause over its prohibition on government establishment of religion. One issue that may be revisited, he suggested, is the burden of proving a true belief. In the past, in conscientious objector and other religion cases, the court assumed sincere faith, even if the litigant’s beliefs were not aligned with those of their religious leaders. Prof. Little surmised that this will change when litigants start claiming religious beliefs that (for example) require abortion in states where it is illegal, or seek to lead Satanist prayer on the 50-yard line of a high school football field.

“Easiest Job in the World.”

Prof. Little touched on a number of other subjects, including gun rights (Kavanaugh and Barrett suggested a governmental right to some regulation), West Virginia v. EPA (not as dire as the headlines imply) and the court’s workload (only about 58 signed and fully briefed decisions, the lowest since the Civil War). On that subject, he noted that Supreme Court justices have the easiest job in the world: responsibility for six or seven decisions each, four law clerks each, briefing by the best lawyers in the country, and summers off.

Come back next year!

The court’s October 2022 term promises to be just as newsworthy, and we hope Prof. Little returns next year for more explanation and insight.