By Lawrence A. Strick 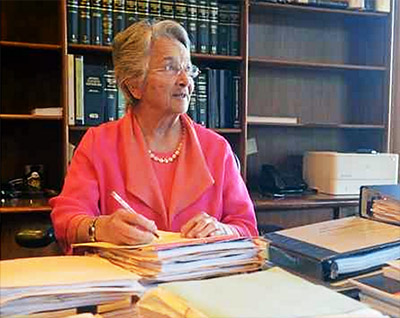 Hundreds of colleagues and friends gathered to honor retiring Judge Faye D’Opal on December 1, 2016 at Terrapin Crossroads. Judge D’Opal was elected to the Marin County Superior Court Bench in 2004. She served in virtually every department during her brilliant judicial career. Her retirement from the Bench was yet another milestone in a career committed to public service.

The standing-room-only party brought together a diverse crowd who have worked with Judge D’Opal at the Marin Community Foundation, the Peace Corps, Legal Aid of Marin, Marin Abused Women’s Services, Marin National Women’s Political Caucus, and/or San Francisco YWCA to name but a few of the organizations in which she has been a leader.

“Judge D'Opal's legacy of community service began in rural Arkansas where she participated in the historic efforts to desegregate Little Rock's public schools. She earned her bachelor's degree from Hendrix College in Arkansas and a law degree from the New College of California, San Francisco. She spent 12 years in Latin America working for the Peace Corps, and became a public-interest attorney. Renowned for her 2013 now historic decision on the death penalty that virtually stopped it in the state of California, Judge D'Opal's career includes many additional legacies and positive impacts on others. From her work to establish a legal self-help center, to her advocacy for abused women for the Legal Aid of Marin, and her work as trustee of the Marin Community Foundation, Judge D'Opal has used her keen intellect to improve the quality of life for others less fortunate by supporting social justice and promoting fairness and equity for all.

In all aspects of her life, Judge D'Opal has acted with principle and courage. As a leader and role model for the LGBT community, and throughout her professional career and extensive public service, she has set a fabulous example for women and young girls everywhere. Even as she is approaching her retirement from the Superior Court, she has been encouraging more women and minorities to get involved in the legal system. Her positive impact on our community will continue as a pro tem judge in juvenile law, and in her pursuit to eliminate domestic violence.”

On behalf of the Marin County Bar Association, it is my great honor to thank Judge D’Opal for her years of service and wish her the best for many great adventures with her partner, Wanden and lovely family.

Lawrence Strick has been a trial lawyer for 34 years, specializing in helping people obtain compensation for their injuries and for survivors of individuals killed by the wrongful acts of others. Strick Law Offices was founded in San Rafael in 1993. He was 2016 MCBA Board President.