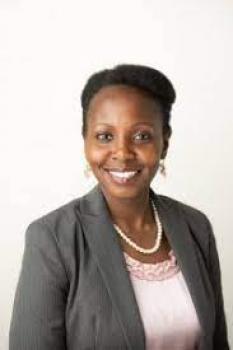 Ann Diamond was a family law pioneer, lauded by many in the California legal community as an unstoppable force changing family law for the better, particularly in the service of women, who had often seen the law work against them. She was the first woman president of the Marin County Bar Association. She founded the first all-female law firm in the country. Under her mentorship, her law partners went on to become Marin County Superior Court judges: Judge Verna Adams and retired Judge Beverly Savitt. Ann also played significant roles in creating the Marin County Women Lawyers and the Family & Children’s Law Center.

Ann was one of very few women to graduate from law school in the 1930s; she was one of only three women at Case Western School of Law and placed third in her class. She worked at the National Labor Relations Board as a legal advocate during Franklin Roosevelt's New Deal. After putting her legal career on hold to become a stay-at-home mother in the 1950s, Ann eagerly reentered the practice of law in the 1960s, continuing as that unstoppable force until her retirement in the 1980s.

Of her many accomplishments, her successful promotion of women as family law attorneys placed her in high esteem with an entire generation of attorneys. Just as significantly, she was instrumental in implementing child and spousal support guidelines, now such an integral part of the California Family Code that it is hard to imagine that she began practice in an era without them. Ann's deeply held views on the need for family law reform and her deeply committed actions to bring about that reform helped bring a more balanced and even-handed approach to divorce. That the evolution of civil rights for women and the march forward towards equality coincided with her work in the family law arena is no coincidence: the reform of family law played an important role in this progress. As Justice Donald B. King stated in 1987, ''To call Ann Diamond an outstanding family lawyer is wholly inadequate. More than just a pioneer in the family law field, she has been our teacher, our example, our leader and our guru.''

Ann Munene could hardly be a more fitting recipient of the Ann Diamond Young Lawyer Award. Awards remind us of legacy and history; awarding them to someone like Ann Munene who embodies that legacy and history helps instill it in others of this generation and inspire the next. The MCBA Board of Directors proudly and unanimously awards the Ann Diamond Young Lawyer Award to Ann Munene in honor of her commitment to providing legal services to underserved communities.

Ann was one of the first recipients of the MCBA Legal Scholarship Award after its founding in 2011. She immigrated to the United States (as did Ann Diamond) and worked to support herself through law school. She is a graduate of the University of California, Hastings College of the Law, with a concentration in civil litigation and dispute resolution. She earned a dual undergraduate degree in legal studies and psychology with a minor in rhetoric from the University of California at Berkeley.

While in law school, she clerked for United States District Judge Jeffrey S. White in the Northern District of California. She also served as a law clerk at the Equal Employment Opportunity Commission, and at both the Legal Aid Society Employment Law Center’s disability rights program and workers’ rights clinic.

Ann was a Ralph S. Abascal fellow, then a staff attorney, at Legal Aid of Marin, primarily providing workers’ rights advocacy to underserved and vulnerable Marin County residents. She prosecuted wage theft, discrimination, harassment, and wrongful termination claims in federal and state courts. She prosecuted wage claims at the Department of Labor Standards Enforcement. And she regularly led community workshops and legal clinics to educate individuals on their employment rights. For her work with Legal Aid of Marin as a workers’ and tenants’ rights advocate, she was one of two finalists for the 2017 Marin Trial Lawyer Association's President’s Award.

Following her work at Legal Aid of Marin, Ann joined Jones Clifford, practicing in the areas of workers’ compensation primarily representing public safety employees and public employee retirement law. She recently completed a term on the MCBA board of directors and she has chaired MCBA's legal scholarship committee for many years. Please join the MCBA board in congratulating Ann!